Like diagnosis, the treatment of Lyme disease is controversial.

What to expect from a General Practitioner in Australia

GPs are not allowed to test for Lyme. And most doctors in Australia will not refer patients (to an infectious disease specialist) for testing for Lyme unless the patient has travelled to a Lyme endemic country. This is because the Federal Government will not concede that Lyme disease can be contracted within Australia.

The reality for Australian patients presenting with Lyme symptoms, is to be told by their GP “we do not have Lyme in this country.” Unfortunately, Australian doctors are trained to believe that the Lyme bacteria Borrelia has not been found here.

If a patient raises the possibility of Lyme disease, there is a high likelihood of condescension, disbelief and suggestions that “it’s all in your head” from medical staff. However, if the doctor suspects a recognised tick-borne illness, or the patient has travelled, the patient may be referred to an infectious disease specialist.

Most doctors are not “Lyme-literate”. They have little training in, or knowledge of Lyme disease and are required to follow the Government’s official tick-borne illness guideline, Debilitating Symptom Complex Attributable to Ticks (DSCATT) Clinical Pathway. Tragically, this guideline leaves patients who contracted Lyme within Australia with symptom management as their only treatment option within the mainstream medical system.

So who can treat me?

Ideally, a Lyme patient will acquire a diagnosis and receive treatment from a Lyme-literate practitioner who refers to the endorsed guidelines below, instead of the Department of Health’s DSCATT Clinical Pathway.

Contact us – we’ll help you find a suitable practitioner.

Lyme treatment guidelines around the world are varied and controversial, with a lack of universal acceptance of any one document.

The Federal Department of Health published Australia’s “official” tick-borne disease diagnosis and treatment guidelines in 2020 – Debilitating Symptom Complex Attributable to Ticks (DSCATT) Clinical Pathway. The Lyme Disease Association of Australia and a number of prominent Australian and international Lyme-literate doctors have rejected this document, as it virtually abandons those patients who contracted Lyme in this country.

The treatment guidelines that Lyme-literate Australian doctors, and the Lyme Disease Association of Australia endorse are:

It is extremely important that a patient with early Lyme or suspected Lyme be treated with antibiotics as soon as possible to avoid the condition turning chronic.

According to the DSCATT Clinical Pathway, a patient with acute, early stage Lyme disease is likely to be prescribed antibiotics for only 3, or maximum 4 weeks, with the expectation of complete recovery. This is inadequate, as we know that some patients have progressed into chronic Lyme after antibiotic treatment in the early stage.

What to expect from a Lyme-literate practitioner

ACUTE / EARLY STAGE – A patient with acute Lyme disease is likely to be prescribed antibiotics for a minimum of 6 weeks, and is carefully monitored. This is world’s best practice according to the International Lyme and Associated Disease Society’s (ILADS) treatment guidelines. If treated early and appropriately, these patients might not suffer any further symptoms.

The University of New Haven states that in vitro studies indicate Doxycycline must be taken to prevent Chronic Lyme disease. Below is a Lyme treatment example (not specific medical advice) from Dr Eva Sapi:

Note: While there’s been recent evidence to the contrary, some doctors will prefer that children under 12 should not have Doxycycline. If the child has a rash and/or symptoms, a two tiered approach is recommended: Clarithromycin and Amoxycillin with dosage adjusted for body weight, for children under 8, please assess with your doctor. Probiotics are recommended.

CHRONIC / LATE STAGE – Chronic Lyme patients require a much longer and far more extensive treatment regime. They usually present with a multi-systemic illness affecting multiple body systems. Many of these patients will have been infected months, years or even decades earlier.

Just one of the complications for late stage patients is that “Borreliosis is a very unusual infective disease presenting as the cell wall spirochaete, intracellular and then cystic form simultaneously” (ACIDS Guidelines).

The 3 different forms of Borrelia make it harder to treat and harder for the immune system to mount defenses against it.

Borrelia is a biofilm bacteria, which means it secretes substances which also offers it protection from the immune system.

The Australian Chronic Infectious Disease Society (ACIDS) Guidelines offer antibiotic protocols for early and late stage patients. But the duration of treatment is dependent on the severity of illness and the response of the patient. Treatment times of 6-12 months for chronic Borreliosis is normal and many patients will require longer.

ACIDS takes an integrated approach, with vitamins, minerals and other supplements suggested as well as antibiotics. The Guidelines suggest specific medications and supplements for associated symptoms such as sleep, seizures, pain, gastrointestinal support and POTS (Postural Orthostatic Tachycardia Syndrome).

According to ACIDS, co-infections should be treated first (e.g. Bartonella, Babesia, Rickettsia, Epstein-Barr virus). Protocols for these pathogens are included and often overlap with those of Borrelia.

Mould illness is emerging as an important factor for many Lyme patients, and must be addressed before the body is able to properly heal from Lyme and other pathogens.

Anecdotal evidence from chronic patients indicates that most require an expensive array of supplements and medications. Many turn to emerging, “unconventional” or complementary therapies to further improve symptoms and support their overall health. Some patients choose to avoid antibiotics, and some cannot tolerate them, so there are patients managing Lyme with non-pharmaceutical antimicrobials.

Diagnosis and treatment in Australia is challenging, so many Lyme patients turn to naturopaths and other complementary therapists for assistance for both early and chronic Lyme. We recognise the potential for naturopaths to offer compassionate Lyme care and endorse Dr Nicola Ducharme’s online practitioner education course, Lyme-Ed for Practitioners for those who wish to assist Lyme patients. There is also a version of Lyme-Ed for Patients. 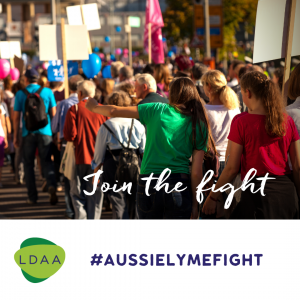 Sorry to interrupt, but we'd love to stay in touch with youWe support Lyme patients and their loved ones. Don't miss news and updates - join the LDAA family by signing up to our mailing list!

No spam, ever! Easy unsubscribe anytime.